Plant a tree in memory of Erich
An environmentally-friendly option 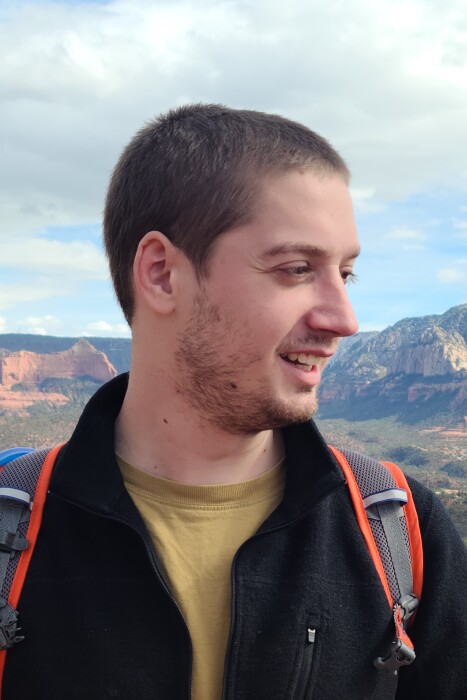 Erich was born February 5, 1998 making our family perfectly balanced. His early years were spent smiling, drooling and capturing our hearts with his gentle way. He truly belonged with us and in the beautiful network of families on Mitchell Ave in Arlington Heights, IL.

Having an early appreciation for music, Erich played Suzuki violin for 6 years at Westgate Elementary School in their Music for Youth program – he even joined band where he took up the clarinet.

Like most kids, Erich participated in Park District sports and found enjoyment and another network of friends within the Muskies swim team which, in turn, led him to a lifeguard position with the Arlington Heights Park District.

At Rolling Meadows High School (2012-2016), Erich was active in water polo, swim team, band and had an easy talent for all things computer related. It was his decision to go west to Arizona, receiving a scholarship to attend NAU for Computer Science.  His parents followed him to Flagstaff which became home.  Most recently, Erich was in the midst of exploring his path while working at Wal-Mart on the Fresh team.

Erich adored the outdoors - hiking with his family scaling the local mountains and red rocks of Sedona, biking, skiing, and spending time at the family lake house in Upper Peninsula (UP) Michigan.  Normally an avid reader, he most recently discovered podcasts and even started to cultivate a talent for cooking spicy foods.  Erich was keen on games of all sorts, especially online gaming with many friends.

Erich was becoming a self-reliant man exploring the surrounding area of Flagstaff, meeting people and living life in his gentle, kind, good-natured manner.  He did not own a car so used his bike as a primary mode of transportation but did not see it as a burden – he enjoyed riding his bike. With a cruel twist of fate, he was abruptly taken in a tragic accident with an automobile on his commute to work.

Kintsugi is the art of repairing broken pottery with gold and silver lacquer. Our family has been shattered and we take enormous comfort in the outpouring of love and support from those who knew Erich. Your shared memories provide lacquer to repair us in hopes to once again be whole - yet imperfect.

He is a new guardian to his mother Renee, father Mark, sister Rachel, Aunts Risë, Diane and Carla, Uncles Russell and Mike, cousins Kenny, Samantha, and Nichole, and Grandma Renz.

There is little doubt that Erich was greeted with a snuggle from Alfie the family dog, a big bowl of ice cream from Grandpa Rytlewski, a big hug from Grandma Rytlewski, companionship with his early morning buddy Grandpa Renz, among many other dear loved ones.

You will forever be in our hearts Erich.

In youth - good-natured and steadfast

In adulthood - towering yet gentle

Softly, softly the gentle giant leaves his tread on our heart

The family will host an online Remembrance on a date TBD.  If you would like to receive updates and details, please let us know at ErichRenzMemorial@gmail.com

In lieu of flowers, donations can be made to Victim Witness Services Coconino County https://vwscoconino.org/donate/

Plant a tree in memory of Erich by clicking here.
To send flowers to Erich's family, please visit our floral store.

A service summary is not available

Plant a tree in memory of Erich
An environmentally-friendly option

Plant a tree in memory of Erich

24 trees planted in memory of Erich

With love and remembrance of Erich.
The Berg family

Wisdom Seekers wishes to donate these trees in memory of Erich. His mother has been a long-time member of our group. Our thoughts and blessings go out to the Renz family.
Barbara Shovers

In memory of Erich Renz
The Todsen Family

In memory of a truly wonderful young man who was taken from us all too soon. He will truly be missed!
Grandma Renz and Raymond Claes

Plant a tree in memory of Erich